Films and TV shows for entrepreneurs to enjoy this summer

There are people who like to learn even on their free days. One of the best ways of doing this is watching films and TV shows, in this way, we can get inspired while, at the same time, having a good time.

This is something that the team of Opentop highly recommends to every startup and entrepreneur, since it’s a different and enjoyable way to learn essential values and get inspired with other people’s real success stories.

For this reason, for every entrepreneur who still wants to learn even in Summer, the team of Opentop, the Valenciaport innovation HUB, has made a list of films and TV shows that you mustn’t miss out on.

– The founder (John Lee Hancock, 2016). This film tells the story of Ray Croc, a blender salesman who bought a burger joint due to its potential, and ended up creating the world’s most famous fast food chain: McDonald’s. In this film we see how innovation and ambition makes the difference.

– The pursuit of happyness (Gabriele Muccino, 2006). A salesman is in bankruptcy and struggling to build a future for himself and his son. This film, based on a true story, teaches us to stay calm and with perseverance even in the worst of situations, trying to overcome the obstacles with the aim of reaching your objective.

– The social network (David Fincher, 2010). This film shows the story of a young student, named Mark Zuckerberg, who decides to create a digital platform in order to contact his friends online. David Fincher shows us, in an incredible way, the story of Facebook’s birth, from its beginning, going through all its difficulties, until it reached what it is today, one of the world’s most important social networks.

If you don’t have enough time to watch a film, don’t worry, there are some TV shows that are great options for every entrepreneur too.

– Abstract: the art of design (Scott Dadich, 2017). This documentary show interviews different designers from various fields with the aim of analyzing and explaining the importance that design has in everything, and more importantly, in communication and business.

– Girlboss (Kay Cannon, 2017). This TV show tells, in a humorous tone, how a young woman in bankruptcy turns into a fashion mogul when she founds her own online second hand clothes’s shop.

– The last dance (Jason Hehir, 2020)Sports can be a great way of learning essential values for your startup. This documentary of 10 episodes shows Michael Jordan’s life, and it has incredible lessons about leadership, strategic partners and teamwork.

If you prefer to get away from the screen for a little while, we add a pair of fundamental books for every entrepreneur, which you can enjoy while you are in the beach:

– Blue ocean strategy (Renée Mauborgne and W. Chan Kim). This bestseller has been recognised as one of the most impactful strategy books that has ever been written. It shows us the importance of creating blue oceans, in other words, new market spaces that haven’t been exploited.

– The 7 habits of highly effective people (Stephen R. Covey). This book, which is divided into seven stages that the reader has to assimilate, is replete with thought-provoking anecdotes. Its aim is to make the reader improve their character, provoking an internal change which will make them change their perception of the world.

Now that you have this list, it’s time to make some popcorn and have a good time enjoying these films and shows as you learn at the same time.

If you want to discover more about Opentop Valenciaport innovation HUB and its initiatives, like the first Opentop incubation program, take a look at our website! 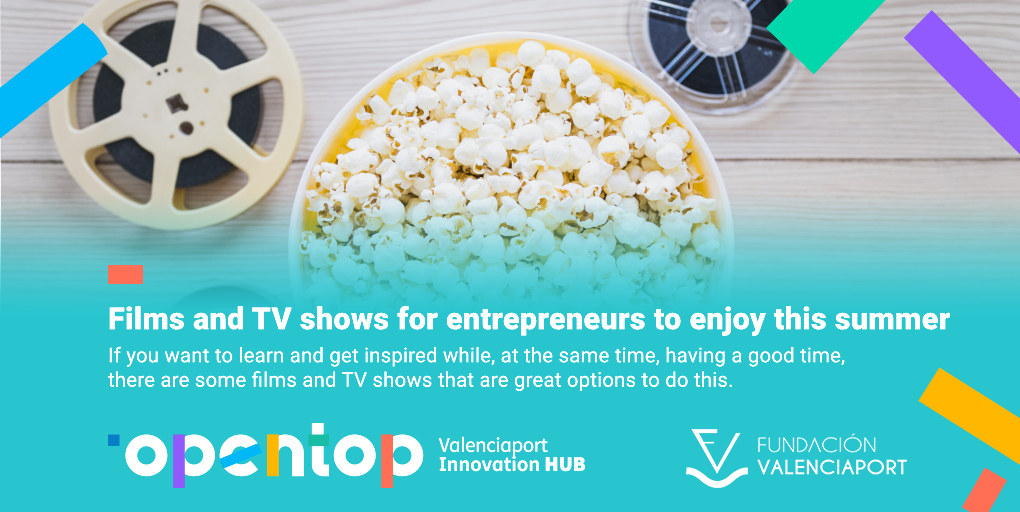 We use cookies on our website to give you the most relevant experience by remembering your preferences and repeat visits. By clicking “Accept All”, you consent to the use of ALL the cookies. However, you may visit "Cookie Settings" to provide a controlled consent.
ConfigurarAceptar todas
Manage consent

This website uses cookies to improve your experience while you navigate through the website. Out of these, the cookies that are categorized as necessary are stored on your browser as they are essential for the working of basic functionalities of the website. We also use third-party cookies that help us analyze and understand how you use this website. These cookies will be stored in your browser only with your consent. You also have the option to opt-out of these cookies. But opting out of some of these cookies may affect your browsing experience.
Necessary Siempre activado
Necessary cookies are absolutely essential for the website to function properly. These cookies ensure basic functionalities and security features of the website, anonymously.
Functional
Functional cookies help to perform certain functionalities like sharing the content of the website on social media platforms, collect feedbacks, and other third-party features.
Performance
Performance cookies are used to understand and analyze the key performance indexes of the website which helps in delivering a better user experience for the visitors.
Analytics
Analytical cookies are used to understand how visitors interact with the website. These cookies help provide information on metrics the number of visitors, bounce rate, traffic source, etc.
Advertisement
Advertisement cookies are used to provide visitors with relevant ads and marketing campaigns. These cookies track visitors across websites and collect information to provide customized ads.
Others
Other uncategorized cookies are those that are being analyzed and have not been classified into a category as yet.
GUARDAR Y ACEPTAR
Funciona con